Christmas in August (aka. Palwolui Christmas)


Christmas in August was the debut feature by director Hur Jin-ho, that also marked my debut as a connoisseur of Korean cinema. The movie stars the charismatic Han Suk-kyu as a photography shop owner, in the small regional city of Gusan. Soon into the movie, we are made aware of a terminal illness of Han's character, who has a few days to live. The viewer is never subjected to the details of the illness itself, instead, the director chooses to take us through the common details of Han's life, such as running into a old flame (who's married) and the awkwardness of their conversations, a routine dinner with his sister's family where they reminisce about their simple childhood memories, late night drinks with close friends, during which Han's character displays frustration and helplessness at his condition. It's the subtlety of these images and interactions that really defines the strength of the director's story telling. A particularly moving scene shows Han's character teaching his aging dad how to use a VCR. After several failed attempts, Han's character walks out of the room frustrated, only to sit and write manuals later in the night, that could be used by his dad for such endeavors once he's gone. 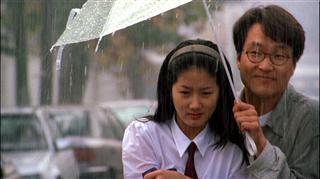 The real highlight of Christmas in August however is the tender romance that blossoms between Jung-won (Han Suk-Kyu) and the beautiful and charismatic Da-Rim (Eun-ha Shim), a meter reader who drops by his studio to develop pictures of parking violators. With each of their meetings, Han's character becomes increasingly attached to Da-Rim, a feeling reciprocated by her (though oblivious of Han's illness), without either of them truly expressing their feelings for each other. 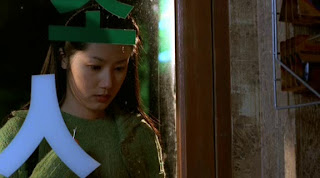 After the sudden hospitalization of Han's character, Da-Rim keeps visiting the closed photography shop, in the hopes of seeing Han's character again. Her anxiety though turns to despair and anguish at Han's absence. A feeling beautifully captured by director with simple but moving images of Da-Rim breaking down in the rest room while at a friend's party, and later on stoning the windows of the Han's photography shop, in anger and despair.

The most tragically beautiful scene however is the image of Han's character sitting in a coffee shop, and looking at Da-Rim noting down the numberplate details of parking offenders (oblivious of Han's helpless gazing eyes, with a tear and planting his palm at the window, trying to hold Da-Rim, as well as saying good-bye). Christmas in August doesn't have the exuberance of 'The bucket list' or the tragic melodrama of other movies with similar themes. The movie stands on it's own by virtue of it's ability to convey the most powerful and moving emotions with simple gestures, subtle expressions, and a measured and intimate approach. A must watch classic.