The Secret in Their Eyes (aka.El secreto de sus ojos) 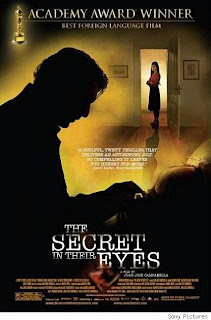 The Secret in Their Eyes is the deserving 2010 Oscar winner in the "Best Foreign Language Film" category. The movie successfully combines elements of romance, mystery, drama and film noir.
Set in early 2000's, the film revolves around a rape/murder case from 1974. Benjamin Esposito (Ricardo Darin), the federal agent responsible for investigating and closing the case, is trying to write a novel with the case as the source material, but struggles as he believes there are still many open questions that needs to be answered. Also involved in the case was his assistant Pablo Sandoval (played by the popular Argentinian comedian Guillermo Francella) and Esposito's boss Irene (Soledad Villamil). Now retired, Esposito goes to Irene to try and find some closure on the case. As we are taken back to the 70's, a beautiful young women Liliana (Carla Quevedo) is brutally raped and murdered. Esposito, moved by Ricardo's (Liliana's husband) undying love and desperation manages to catch the culprit, only to later see him get released by an old rival, Romano, associated with a powerful special agency.
One of the highlights during this phase of the movie is the performance of Pablo Sandoval (Esposito's assistance), who manages to create a memorable character of a drunkard, but with the natural instincts of a investigator.

As Esposito and Irene recall these old events, we are also introduced to the tender chemistry between them. Esposito is also trying to find closure from his unrequited love for Irene. The director brilliantly manages to capture the subtle and matured romance between them, without ever sidetracking from the main story, and makes it an integral part of the mystery. Despite the length, the movie never releases the tautness of the mystery, and will keep the viewer engrossed till the thrilling conclusion. The detailed character takes is what sets The Secrets in their Eyes apart from any other commercial mystery thriller, helped largely by fine performances by an extremely talented cast (whom I must confess I had never seen before on screen). This is a staggering piece of film-making that strives in it's restrained approach and succeeds as a classic adult thriller.