Language - German
Genre - Drama, Mystery
**ing - Christian Friedel, Ernst Jacobi and Leonie Benesch
Release - 2009
The White Ribbon is a dark drama set in the German Village of Eichwald just before WW1. Directed by Michael Haneke, the movie gained widespread critical acclaim and won the Palm d'Or at the 2009 Cannes Film festival. In addition, the movie won the 2010 Golden Globe for the Best Foreign Language Film of the Year and was also nominated for the 2010 Academy Award in the same category.
The movie is completely shot in black and white, and adds to the authentic feel of the movie set in 1913-1914. The choice of color also accentuates the generally dark theme of the movie. The story is narrated by an old tailor who happened to be a teacher in the village when a series of 'unexplained' incidents took place and seem to involve the children in the village. These incidents, in the words of the narrator, reflects the future events of his country which is most probably the reign of extremism under the Nazis. 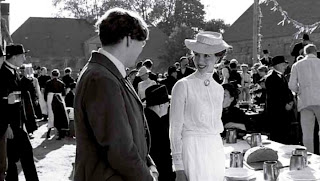 It starts with the village doctor breaking his collar bone after his horse trips over a thin wire strung in its path. Soon after, a village women dies in a saw mill as a result of an 'accident', which incites the woman's eldest son to seek vengeance against the owner of the saw mill, the wealthy Baron, who lords over the village. His act of vengeance involves destroying the cabbage farm of the baroness while the village was indulging in harvest festivities. The movie progresses with other 'unexplained' events that leave the villagers disturbed, though still clueless as to the people responsible or their true motives.


But, this is not really a mystery movie but a intense character study. It cleverly alludes to the origins of extreme emotions such as hate, envy, jealousy, bitterness in seemingly 'normal' placid family structures.  A respected doctor who's slowly unraveled as a mean and self absorbed person and an abusive father. A pastor who doesn't hesitate to punish his children at the slightest hint of the spiritual health of his family compromised. A steward who becomes an father at an old age which results in a bout of jealousy in one of his teenage sons.

The only innocent adult characters in the movie seem to be the obedient wives and the narrator who is smitten by the nanny of the baroness's twins. Their tender love story is probably the only respite in this otherwise grim tale. 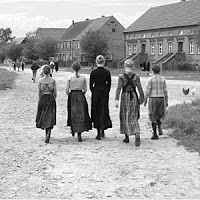 The movie might leave a few disappointed with it's slow pace and 'unresolved' ending, but offers enough clues and character details that allows you to discern the possibilities. The director masterfully explores and details out the most innate details of the characters and you see them gradually evolve as you patiently trod through the scenes. The movie's cinematography, plot-development and pacing does wonders to capture the dark theme of the movie. Also worth mentioning is the brilliant performance by the child-actors who are able to convey innocence and malice in the most believable manner.
Discussing about his movie, the director Michael Haneke had exclaimed that the movie portrays "the origin of every type of terrorism". Without commenting on the success of Haneke's intention, I do believe the movie is a potent stab. This is definitely a movie which is meant to be reflected on, rather than enjoyed as an entertaining ride.
Drama German Mystery Palme d'Or