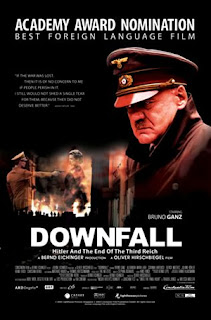 I always found it surprising that Adolf Hitler, the man responsible for World War II, doesn't have more movies that examines the man behind the monster. It is only befitting that it is the Germans  who decided to present a humanistic portrayal of the Nazi dictator, albeit just through his final days in his heavily fortified bunker in Berlin. The movie drew criticism from a section of journalists who objected to this humanizing of evil.
The movie is presented mainly from the perspective of one of Hitler's secretary Traudl Junge. Bernd Eichinger, the writer, heavily used the memoirs of Traudl Junger and the book 'Inside the Third Reich' by the historian Joachim Fest as his source material. In addition, he also referred to the books by many surviving German officers who gave eye-witness accounts of these last few days in their written books. Given the research involved in the project, one should accord great deal of authenticity to this film.
Directed by Oliver Hirschbiegel, the movie won rave reviews and was a major box office hit. The movie won a number of awards, most notably an Academy Award nomination in the Best Foreign Film category (where it lost out to Javier Bardem starrer, 'The Sea Inside'). The movie was also popular in the 'pop culture' with numerous parodies of scenes from the movie, especially the scene depicting Hitler's furious rant upon realizing that the war maybe lost. Here's one of my favorites. 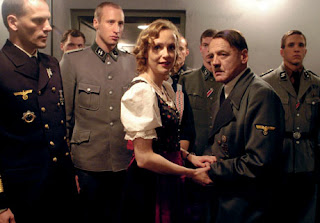 The film begins with the arrival of Traudl Junger to the bunker for a position as Hitler's secretary, along with other young hopefuls in 1942. After her selection, the time-frame quickly shifts to Hitler's 56th Birthday in 1945, few days before Hitler's suicide. Noticeably weaker and under severe duress, Hitler still paints a figure of a man convinced of a victory against the 'flawed democracies' of the west and the communists from the east, even with the fast-approaching Russian troops who have Berlin in sight. Bruno Ganz as Hitler (one of the finest performances I've ever seen on screen) manages to capture the nuances of the monster, right from his slouched contour and trembling hands to the choked speech that often erupts with a force so violent so as to cause everyone in his presence to shudder. As days progress, his words start to lose the conviction of a delusional final victory and starts accepting the inevitable. 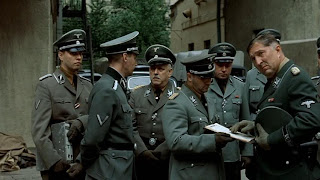 Never to blame himself, Hitler starts to become more disapproving of his Generals and also believes that the German civilians don't deserve to be saved as they were just too weak to fulfill Germania's destiny of becoming a super-empire. Hitler's closest members include men of high positions who present a wide diversity of personalities. We have careerists, opportunists, sycophants and his true admirers and believers and the actors portraying them manage to portray these traits with conviction in subtle details in the limited time they have on the screen. The casting team should be applauded for the brilliant ensemble cast.

The film has a paradoxical protagonist in the form of  Traudl Junger (Alexandra Maria Lara). A 22-year old innocent young women oblivious to the monstrosity of Hitler who believes in respecting and caring for the individuals around her in the bunker. In-spite of her confused admiration for Hitler, you'd still end up empathizing with her. Juliane Köhler also does a great job as Eva Braun (Hitler's mistress). In one scene, Eva begs for the life of her brother-in-law, an officer who is suspected of desertion and ordered for execution by the Fuhrer. After failing to convince him, she simply acknowledges Hitler's dictum with a servile 'Mein Fuhrer'. For Hitler, everyone close to him and around him were just pawns to be used in his vision of a grand Germanic empire. In another disturbing scene, we see Magda Goebbels, wife of Nazi Germany's Propaganda Minister Joseph Goebbels, administering poison to her seven children as they are drugged to sleep, believing there's no future without 'National Socialism'.
Downfall ( Der Untergang) joins the likes of Schindler's list, Saving Private Ryan, The Thin Red Line as one of the finest modern day WWII movies. Sitting through this nearly 3-hour movie, one cannot help but appreciate the meticulous details and the struggle it must have been for everyone involved, especially as the movie makes a daring attempt at portraying the human (not humane!) side of a man that Germans are not comfortable talking about, even to this day.