Language - German
Genre - Drama, Crime, Action
**ing - Martina Gedeck, Moritz Bleibtreu and Johanna Wokalek
Release - 2008
For a better part of 1970s and 1980s, the left wing extremist Baader-Meinhof group (later known as RAF: Red Army Faction) terrorized the West German government with it's spree of high-profile assassinations, robberies, bombings and kidnappings. The Baader- Meinhof group feared Germany turning into a fascist police state as the West German Government was helping US in the Vietnam War, supported Israel, entertained cordial relationships with the anti-democratic and dictatorial Shah of Iran and openly embraced 'imperialistic' American capitalism.
Based on Stefan Aust's best selling non-fiction German book, and written and directed by Uli Edel, The Baader-Meinhof Complex chronicles the rise and fall of the Baader-Meinhof group.The movie was well received by critics around the world and was nominated for an Academy Award and a Golden Globe in the Best Foreign Feature Film category. 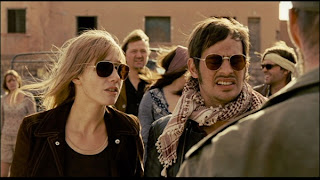 The talented cast includes Moritz Bleibtreu as the ruthless hot-tempered Andreas Baader, Johanna Wokalek as the beautiful and passionate anarchist Gudrun Ensslin (also  Baader's girlfriend), Martina Gedeck as the intellectual journalist Ulrike Meinhof, the founding members of the ultra-violent left wing extremist group. Moritz and Johanna perfectly capture the intensity, passion and the rage of their characters, and Martina's Meinhof is careful and restrained, and with an inclination for words rather than violence, in her portrayal. The brilliant Bruno Ganz (as Hitler in Downfall) gives a sedate, yet brilliant performance as the Intelligence officer responsible for the RAF case. The rest of the cast is also impressive, in the limited time they have on the screen. 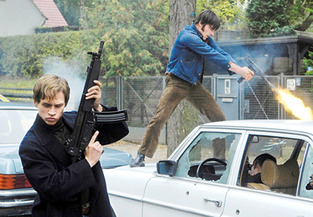 Uli Edel brilliantly chronicles the major incidents involving the group in detail and have been pictured in a very measured and authentic fashion, accentuating the impact of the group's violent acts on the story-telling. This however is the weakness of the film as well. I felt the characters to be a bit under-developed and their relationships with each other virtually unexplored, inspite of it's 150 mins running time. As a result, the second half of the movie, with the major group members in the prison, seems to move on mechanically, wasting the potential for great drama given the backdrop. But Uli Edel more than makes up for it with the raw intensity and realism of it's action sequences. Given the large number of high-profile incidents the group was involved in, and Uli Edel's preference for events over drama, The Baader Meinhof Complex never loses it's momentum and is an thrilling ride till the end.