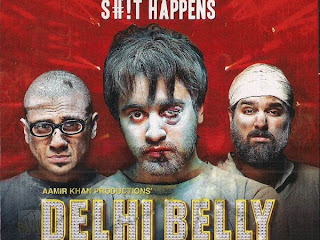 Gangsters, stash of diamonds, drugs, cops and 'innocent' (well, not really !) gang of friends caught in the midst has been tried many a times before. With the surprise 1998 'blockbuster' hit Lock, Stock and Two Smoking Barrels by the talented British director 'Guy Ritchie', the formula has been unleashed on the movie-goers by filmmakers around the world. Such efforts have come, entertained and vanished without a trace, with rare exceptions such as Guy Ritchie's follow-up hit Snatch in 2000.


The Indian mainstream movie industry ('Bollywood') itself has produced a string of immensely forgettable movies with similar plot-elements. Delhi Belly, on first impressions', makes it work. The movie stars Imran Khan as Tashi, Vir Das as Arup and and the Kunaal Roy Kapur as Nitin, the poor soul afflicted with the notorious 'traveler's curse; 'Delhi Belly' .


Produced by Amir Khan productions with the proverbial 'midas touch', Delhi Belly is an all-out entertainer that is unabashed in it's approach. The pervasive toilet humor, sexual jokes and expletive count in the movie is likely to shock the 'common' people of India who have grown up with their song and dance formulas that are largely promoted as 'family movies'. Though the explicit content in the movie might fail to shock any of the western audiences who have seen teen comedies like the American Pie series and Van Wilder, never has an Indian movie upended cultural expectations with such goofiness.

The story revolves around three friends/flatmates, the journalist Tashi, the photo-journalist Nitin and the cartoonist Arup who are leading typical urban young lives with Tashi about to get married to his girl-friend Soniya (Shenaz Treasurywala).

All hell breaks loose as Soniya's favor of transferring a parcel for a fellow air-hostess turns into a nightmare for the three friends due to an innocent mix-up with a stool sample, leaving a gang of local smugglers extremely unhappy. But more than the amusingly chaotic plot line, it's the ensemble performances (I struggle to remember any weak acts) and the 'dirty/witty one liners' (Nitin on Tashi's new dowry car: "This is one ugly car. This is what you get when a donkey humps an auto rickshaw.") that does the magic.

The newcomer director Abhinav Deo's urban comedy caper has a natural cross-over potential and is likely to invite multiple viewings from it's targeted audience - the new-age 'Hinglish' speaking urban youth.

The rest, you have been warned !