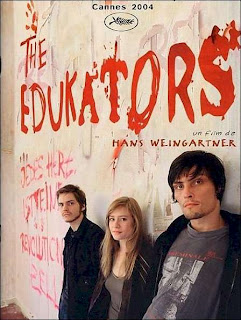 As you watch the German-Austrian movie The Edukators, you can't help but feel lost at defining the identity of this film. With varied elements such as political satire, dark wit, a love triangle, crime, and radical idealisms, the movie could be considered a genre-bending exercise, but it doesn't really feel like one.
The Edukators feels more like a journey adorned with rich and dramatic experiences. That is exactly what the Austrian Director Hans Weingartner's intent was - "The Edukators is a movie about the last 10 years of my life - wanting to be part of a political movement and never really finding one that worked. I believe that we live in a time when young people crave political change but truly don't know where to begin. Perhaps our societies have grown so individualistic that a collective dynamic is no longer possible."
Released in 2004, the movie was nominated for a Palme d'Or at the Cannes Film Festival. The Edukators stars Daniel Bruhl as Jan and Stipe Erceg as Peter, two childhood friends from Berlin who enact their radicalisms  under the pseudonym, 'The Edukators'. Frustrated with the social inequities existing in present day Germany, 'The Edukators' educate the upper-class oppressors by breaking into their villas  and 're-arranging' the furniture and 'literally' leaving a message for the rich that "Their Days of plenty are coming to an end". 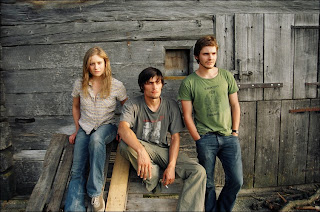 The newest (unplanned !) addition to the 'The Edukators' group is Peter's romantic interest Jule (Julia Jentsch). A liberal minded individual herself, Jule's past-times include being part of anti-capitalism protests organized by the young revolutionaries of Germany. A victim of 'social injustice', Jule has to work hard as a waitress in order to pay back the damages to a rich businessman Hardenberg (Burghart Klaußner), whose Mercedes she accidentally 'totaled' on the highway. While Peter is away on a trip to Spain, Jan and Jule get drawn to each other, and  during one of their nights out together, decide to gauge the extent of 'injustice' on Jule and to 'Educate' Hardenberg. Things however don't proceed as expected and after a few unexpected turn of events,  Peter, Jan and Jule end up making a trip to a isolated mountain cabin on the hills, with the forced companionship of Handenberg.

All the actors play their roles to perfection, and that is the greatest asset of the film. Having seen the fine performances of Daniel Bruhl as the mischievous son of a East German Socialist in Good Bye, Lenin! and of Julia Jentsch as the tragic heroine Sophie in the WWII drama, Sophie Scholl: The Final Days, I was greatly impressed with the ease with which they played Jan and Jule, quite different than the former performances. Burghart Klaußner also puts up a natural act, and won the Best Supporting Actor in the 2005 German Film awards for his efforts.
The Edukators has a lot of heart and is refreshing in it's appeal. It takes you on a journey where ideologies  and ideas of revolutions are explored and debated in conversations, rather than preached on unsuspecting viewers. But, at the end of it all, as in Good Bye, Lenin ! (Read Review), 'The Edukators' make you realize that all this is peripheral to the primal human desires of romance, love and friendship.