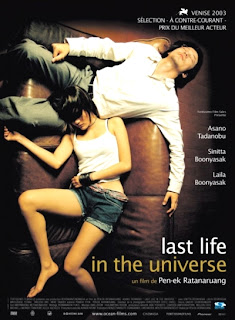 Last week I saw the entertaining "The Blind Swordsman - Zatoichi"  by Takeshi Kitano and was impressed (yet again!) by the Japanese star Asano Tadanobu's performance as the Ronin Hattori Genosuke, the 'ultra-cool' assassin and nemesis of Zatoichi. There's a reason why Asano is hailed as Asia's answer to Johny Depp. Having previously seen him in Takashi Miike's cult-classic Ichi the Killer, I decided to explore his other acclaimed works and stumbled upon the little known gem "Last Life in the Universe". Directed by acclaimed Thai auteur Pen-Ek Ratanaruang, the movie is really a cross-cultural enterprise with dialogues in Thai, Japanese and English. The movie's style also bears a strong resemblance to the films by the great Hong-Kong director Wong Kar-Wai that probably has to do with the cinematography by Christopher Doyle, who has worked with Wong Kar-Wai on some of his most acclaimed films such as Days of Being Wild, 2046, In the Mood of Love, among others. 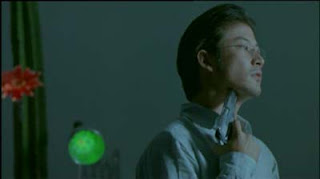 Last Life in the Universe is set in Bangkok and revolves around the friendship and romance between a lonely and suicidal Japanese librarian  Kenji (Tadanobu Asano) and a free-spirited pot-spoking Thai woman Noi (Sinitta Boonyasak)  who's about to leave for Osaka in a few days, as they are brought together by a personal tragedy. The movie begins with a shot of Kenji making another attempt of suicide, one of many for clean-freak Kenji who always backs out or is interrupted, this time by his rude Yakuza brother. 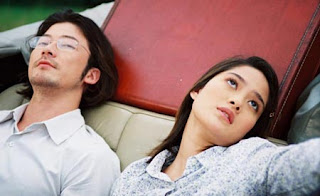 In Kenji and Noi, we have a comical mismatch of personalities making their interactions and time together at the coastal house of Noi interesting, despite the lack  of engaging dialogues. Little comes in the way of their backgrounds, especially of Kenji's reasons to move from Osaka, though a few shots of his bare-back covered with dragon tattoos are suggestive. For most of the running time, Last Life in the Universe has almost got a zen like feel to it (complemented by Doyle's brilliant cinematography), only to erupt violently, courtesy an abusive boyfriend and Yakuzas. 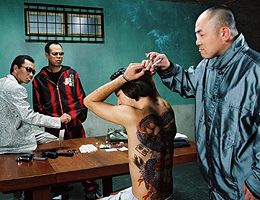 The themes of sorrow, grief and loneliness pervades large parts of the story-telling (though I must admit there is not much in the name of a story, though the ending of the film could definitely be the subject of interesting coffee-shop conversations), but there's always a strong undertone of warmth and optimism interspersed through-out.
Last Life in the Universe could be criticized as being self-indulgent, but it's dream like atmosphere with a brilliantly subtle background score  almost makes it a meditative zen-like experience that has to be experienced.