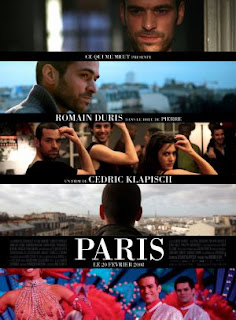 Paris is a multi-storyline ensemble piece set in Paris (obviously!). The movie is written and Directed by Cédric Klapisch , who seems to have a panache for multi-character affairs; L'Auberge Espagnole (2002), Russian Dolls (2005).  Paris is undoubtedly  the most ambitious effort by the director with an impressive star cast and ensemble plot elements.
Paris in essence is a story about love, tragedy and hope. Though the movie has multiple story-lines, it primarily revolves around a young cabaret dancer Pierre (Romain Duris) who is diagnosed with a heart condition and needs a heart transplant (with roughly 40% chance of success), and his elder caretaker divorced sister Élise (Juliette Binoche). There are also other parallel story-lines, a history professor Roland (Fabrice Luccini) going through his mid-life crisis who's also a presenter of a new TV show unraveling the history of the great city and is infatuated with one of his young students (Melanie laurent), Roland's polar-opposite 'normal' brother with a pregnant wife and others. 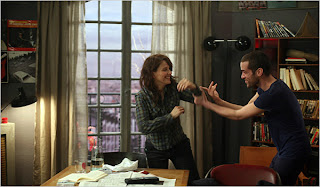 Paris, for the large part, is a reflection on the lives of the bourgeois working class populace of Paris. There are also a few fleeting scenes of a North African man from Cameroon attempting to make his way to Paris, that could have well been an afterthought from Cédric Klapisch rather than a integral part of the film. The movie doesn't really try to capture the diversity across social strata but rather through individual characters. The movie has a largely buoyant feel to it despite the tragic elements, arguably increasing it's appeal to a wider audience. 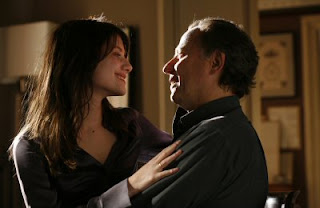 Sadly though, the movie fails to realize it's potential. Though the character takes are interesting and engaging, there are too many loose-ends by the time the credits start rolling after 120 minutes. With the exception of the brother-sister story of Pierre and Elise,  and the humorous professor-student sub-plot revolving around the  fling between Roland and  Laetitia, other story-lines have a feeling of being left orphaned. But despite it's weaknesses to evolve into a truly complex and sophisticated affair, it still is a largely enjoyable  movie to spend a evening on, especially if you are a great admirer of the city of Paris. 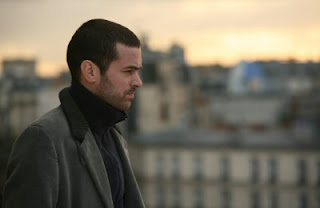 During the beautiful last moments of the film, Pierre rides through the city of Paris  in a cab to reach the hospital for the heart-transplant (a trip he likens to a trip to the 'gallows'). He passes through the characters of the movie and wonders why the Parisians spend so much time complaining about their lives and arguing  over petty things, rather than truly admiring and enjoying every moment of their life in the beautiful city. In a way, to truly appreciate the film, you should share Pierre's perspective in these last moments, and you might find a greater appreciation for the movie.