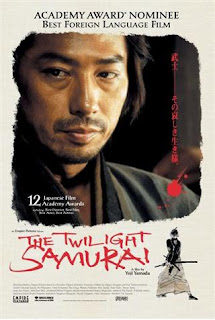 The Twilight Samurai is directed by the Veteran Yoji Yamada, the man behind the Tora-San series of films which has about 48 installments. The movie is also the first of the acclaimed Samurai Trilogy by Yoji Yamada. The movie opened to widespread critical acclaim and was nominated for an Oscar in the Best Foreign Feature Film category, but lost out to the French-Canadian film Les Invasions Barbares (Review).  It did however win Film Awards in festivals across Asia, most notably an unprecedented 12 Japanese Academy Awards, and the Hong Kong Film Award. 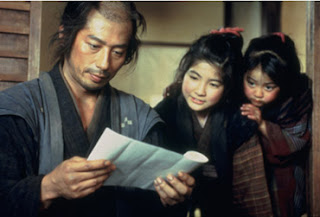 The Twilight Samurai revolves around a petty Samurai, Iguchi Seibei, who's also a single parent having to take care of two young daughters and a senile mother on a paltry stipend, working as an accountant keeping stock of inventory. Yoji Yamada presents a very authentic portrayal of a 'ordinary' Samurai, a clear departure from the action-figures that Samurais are generally portrayed as on celluloid. Iguchi Seibei is tardy and wears dirty and torn Kimonos, and likes to rush home to his mother and daughters as soon as the day's work is over, earning him the nickname 'Twilight'. 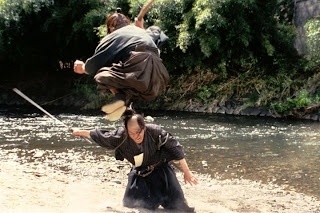 Devoid of any grand ambitions, Iguchi Seibei's greatest pleasure in life comes from watching his young daughters grow. But he's also a 'great fighter'.  His abilities are on display as he confronts the abusive ex-husband of his childhood sweetheart Tomoe (Rie Miyazawa), and challenges him to a duel.
A short and brilliantly choreographed sword-fight is presented in a very authentic and de-glamorized manner; simply a re-enforcement of Yoji Yamada's intent  to present a human drama stripped of usual Samurai fanfare. 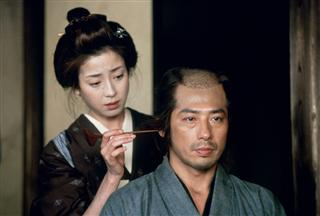 It'd be a stretch to call Tomoe's and Seibei's yearning and undeclared love for each other in the movie as romantic. As Tomoe tries to become a part of  Seibei's family by doing the household chores and spending time with his daughters, re-kindling their emotions, the pragmatic protagonist has to weigh the superior Samurai status of Tomoe's family when deciding on the offer of marrying her. Hiroyuki Sanada brilliantly portrays the paradoxical hero, a Samurai with all the expected qualities of the medieval warrior class, but still being an antithesis of the Samurai legend.

As with all Samurai movies, the movie has a climactic duel between Seibei and a out-of-favor retainer (also a master swordsman) who's been asked to commit suicide by the new group of retainers who have assumed power after the death of the prefecture's lord, but refuses to do so. But the duel is more memorable for the heart-to-soul conversation between the two warriors than the actual fight. The Twilight Samurai is impeccable in it's subtlety. It's a gentle and humanistic depiction of a Samurai and the lives of those around him. Those expecting clash of Katanas and blood splatters are bound to be disappointed, for this is not a Samurai action movie, but the movie about a man, who happens to be a Samurai.