13 Assassins (aka.Jūsannin no Shikaku)
Language - Japanese
Genre - Action
**ing - Kôji Yakusho, Takayuki Yamada and Yûsuke Iseya
Release - 2010
13 Assassins is a Samurai Epic based on a true incident from the controversial and provocative Japanese auteur Takashi Miike (Miike's Recommended movies). The movie was nominated in a number of categories in both the Japanese Academy Awards and Asian Film Awards, in addition to a Golden Lion nomination at the 2010 Venice Film festival. Along with the fine direction, the movie was praised for it's technical brilliance in areas such as sound, lighting, set-design, cinematography among others.
13 Assassins is reminiscent of Kurosawa's 'Seven Samurai', though not as deep, but grittier, bloodier and a lot more entertaining. Like so many other Samurai tales, the movie is about courage, duty, justice, sacrifice, and above all, honor. The story revolves around a group of Samurai who come together to assassinate the evil lord Naritsugu (impressively played by Gorô Inagaki). Lord Naritsugu, being the younger brother of the Shogun, commits acts of extreme brutality with impunity. 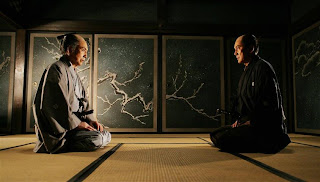 In the opening scenes Takashi Miike uses his supreme ability to create shocking and disturbing graphic imagery on screen (although restrained and tempered by his standards) to detail out Lord Naritsugu. Concerned with the heinous acts of Lord Naritsugu and the ramifications for the people if he was to assume a position of high government authority, the Shogun council secretly hires an aging and decorated Shogun Samurai Shinzaemon Shimada (Kôji Yakusho) to assassinate Naritsugu. 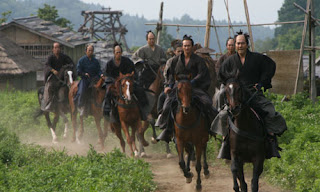 Shinzaemon's posse are a mixed bunch. His drunkard-gambler nephew, an old student, young Samurais from other clans, a ronin (master-less Samurai) and a rowdy wanna-be forest bandit who joins the party just to experience some Samurai adventure.

Though, I didn't recognize any of the actors, they are an impressive bunch and seem perfectly cast for their roles, especially the rowdy hunter who brings about rare moments of humor in the movie. 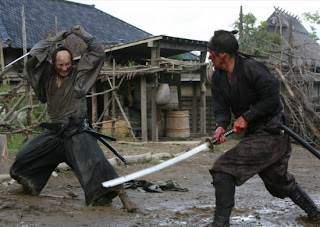 Shinzaemon's real nemesis in the movie is his old classmate Hanbei (Masachika Ichimura). A devoted and clever Samurai like Shinzaemon, who's willing to sacrifice his life for his duty to protect his lord, in-spite of being repulsed by his actions. 13 Assassins pays homage to the Samurai way of life and their code with great effectiveness, with scenes of hara-kiris and seppuccos, sacrificing their lives for duty and honor. At the same time, the movie will also leave you feeling bewildered by it's absurdities. At the end of it all though, the movie really shines in it's last 45 minutes that showcases Miike's attention to details.
In the showdown, the realization of being on a suicide mission doesn't stop these Samurai warriors from fighting till their last breath and the graceful swings of their Katanas to the wounded and tired stabs are captured with perfection. With it's technical brilliance and stunning visuals, the epic showdown between the 13 assassins taking on 200 bodyguards of Lord Naritsugu is one of the greatest you'll ever witness on screen. From the contraptions created by the 13 Samurai's to the sword fights, the movie revels in details and keeps you engaged throughout.
This is undoubtedly the greatest work by the brilliant director till date, and complemented by a great technical team and a superb cast, making 13 Assassins one of the best movies to come out of japan in recent times and has set a new benchmark for epic samurai movies.