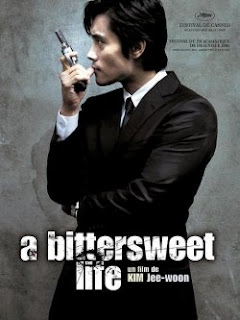 "On a clear spring day, a disciple looked at some branches blowing in the wind, and asked, 'Master, is it the branches that are moving, or the wind?' Without even looking to where his pupil was pointing, the teacher smiled and said, 'That which moves is neither the branches nor the wind, it is your heart and mind."

A Bittersweet Life (Dalkomhan insaeng) is a Korean Neo-noir action thriller directed by the brilliant Kim Ji-woon who has proven his ability to tackle a wide variety of genres in a successful manner. Over the years, he has delivered critically acclaimed and commercial hits such as The Good, the Bad, the Weird, A Tale of Two Sisters and most recently the ultra-violent and viscerally engaging I Saw the Devil. Along with the brilliant direction, the major tour-de-force behind the success of the movie is the charismatic Korean star Lee Byung-hun (Joint Security Area, The Good, the Bad, the Weird, I Saw the Devil).


The story revolves around a good-looking (and well-dressed) mob enforcer Kim Sun-woo (Lee Byung-hun) who also happens to be a Manager of a hotel named 'La Dolce Vita' owned by a cold and calculating mob boss Kang (Kim Yeong-cheol). As a loyal henchman for Kang for seven years, Kim has the trust of Kang and is reciprocated with respect and admiration by Kim. 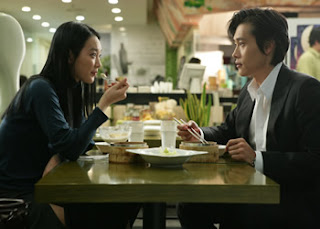 Being his trusted lieutenant, Kim is handed the responsibility of watching over Kang's beautiful young mistress Heesoo (Shin Min-ah) while Kang is away on a trip. Kang suspects Heesoo to be having an affair. Kim's orders are simple, if Heesoo is having an affair, kill her or inform other henchmen to do the job. As Kim starts to spend time with Heeso that includes some awkward conversations, he starts falling for her. The camera-work beautifully captures the way Kim sees Heesoo, her smooth skin, the way she brushes her hair behind her ear, playing with her spoon while eating, her innocent smile.


Things get complicated as Heesoo is indeed having an affair and after being caught red handed, Kim takes the fateful decision to let her, and her lover go scot-free, provided they promise never to meet again.

As with the plot, the movie takes a violent turn as Kang feels betrayed by Kim and orders his death. Kang's anger being fueled not by Kim's failure to follow the order but the feeling that Kim might have fallen for Heesoo. What ensues is a brilliant escape fight between Kim and countless Kang's henchmen in a warehouse that is both brutal yet stylistic in execution. The rest of the movie is a violent affair but brilliantly paced with interesting characters such that the movie never seems to rush towards it's inevitable end. The climactic action sequence is one of the highlights of the movie. Though high on the body-count, it's as much style as substance and is a fitting finale to the thrilling ride. A Bittersweet Life is essentially a revenge themed gangster film that largely has cliched plot elements. But what it lacks in orginality, it more than makes up for with it's finesse and a brilliant performance by Lee Byung-hun.