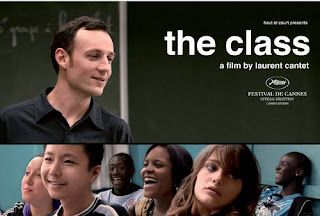 'The Class' (Entre Les Murs) is a French drama by Laurent Cantet that won the prestigious Palme d'Or at the 2008 Cannes Film Festival. The movie was also nominated for the Academy Awards in the Best Foreign Film category.

The Class (Entre Les Murs) is based on a Novel of the same name by French Author François Bégaudeau (who also stars in the movie as a teacher), and is largely inspired by his experiences as a French Language teacher in a middle school in Paris. The literal translation of 'Entre Les Murs' is 'Between the Walls', it's an apt title' as the entire movie takes place mostly in the class-room, staff room of the teachers with a few outside scenes in the school compound. François Marin (François Bégaudeau) plays his natural self as a teacher in the movie, which only elevates the realism of the drama. The movie offers a fresh and realistic perspective to teacher-student dramas and at times would leave you wondering if you are actually watching a documentary. 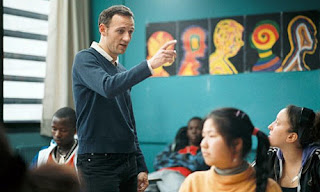 For those expecting a inspirational movie revolving around relationship between teachers and their pupil as seen in other classics such as "Mr. Holland's Opus","To Sir, With Love" would be surprised (pleasantly!). Too often, movie with such backdrops are defined by cliches of an idealist teacher imparting valuable life lessons to young trouble makers, in the midst of other teachers who seem to have come straight out of the Pink Floyd anthem, 'Another brick in the wall'. François Marin, as a teacher, is professional, pragmatic and fallible individual who can get irritated, will complain to parents, or take a student to the principals office if the need arises. The students(in their mid-teens) are the usual mix with varied ethnic backgrounds that many of us would have studied with during our school days, which can make you feel nostalgic at times. There's a loner from a Chinese immigrant family, a chatterbox, a trouble-maker who doesn't mind getting into fights, a self-anointed victim of the teacher's Vendetta, among others. 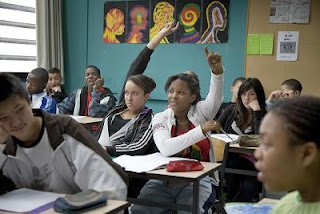 Both the teachers and the students play their part to perfection and the class-room interaction between François Marin (the teacher) and the students are a highlight in the movie. Even mundane discussions around topics such as French grammar, rare words etc are handled with great skill and are entertaining to watch. The movie doesn't spend too much time exploring the background of the students in an effort to make the viewers relate to their mindsets and their behavior (and somewhat try to justify it), but instead just shows them as they are (regular teens).
For a movie that covers a 'routine' academic year with and the 'routine' trials and tribulations of the students during that academic year; The Class (Entre Les Murs) skillfully manages to keep the viewers remain interested in the proceedings throughout and offers an interesting insight into the minds of 'routine' teachers and 'routine' students in a very realistic setting. A definite recommendation for anyone who's looking for a fresh and realistic movie experience.