Departures (aka. Okuribito)
Language -Japanese
Genre - Drama
**ing -  Ryôko Hirosue, Masahiro Motoki and Kimiko Yo
Release - 2008
Okuribito (Departures) is a 2008 film by the Director Yôjirô Takita. The film came to the attention of the international audience after it won the Oscar for 'Best Foreign Language Film' at Oscars 2009. Even before that, the movie had already won great acclaim at home. It had swept the Japanese Academy awards by winning 10 of them, and many others awards in festivals across the world . It was also a great commercial success, definitely helped by the 'Best Foreign language Film' Oscar.

The movie stars Masahiro Motoki (Daigo Koboyashi) as a devoted cellist with an Orchestra company in Tokyo, who becomes unemployed as the struggling company is dissolved. As a result, he decides to move to his ancestral hometown Sakata, along with his wife Mika (played by the beautiful Ryôko Hirosue). During his job search, he comes across the ad for a firm that specializes in 'assisting departures' (which he assumes might be a travel agency). He lands the job on the spot with ease, in an office full of coffins (still confused as to the work). Soon, he realizes that the job involves 'preparing the dead'. After some self deliberations, he halfheartedly accepts, mainly because the job pays well. He goes back home to celebrate with his wife and tells her that he would be responsible for carrying out some ceremonies. He has a unsavory first assignment which involves cleaning and dressing up the body of an old woman, that remained undiscovered for over two weeks. Returning in the bus, he notices his fellow passengers getting uncomfortable with a strange smell. He decides to go the public bath and clean himself before returning home to his wife. In spite of these events, Daigo shows the resolve to continue, which is a statement for the compromises that a person is willing to make for the sake of their family. More relevant in the context of the financial crisis that resulted in thousands of people going jobless. 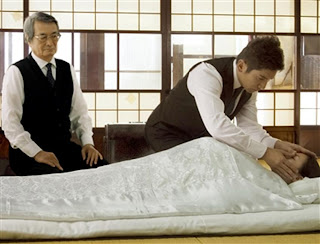 As the movie progresses, with Daigo, the director takes everyone into a world that values culture and tradition, the gracefulness of such ceremonies, the gratuitousness of people left behind and the sense of fulfillment, even in an act of cremation that people at large generally consider morbid. The direction and cinematography is brilliant to say the least, and there is a sense of grace and respect accompanying the vivid details of these rituals. As Daigo performs more of such ceremonies, he starts getting a sense of respect for his job. A feeling not shared by his wife, as she discovers a DVD of these ceremonies, and threatens to leave him unless he quit and get a 'decent job'. Daigo refuses.

A few months later, his wife returns as she is pregnant and expects that Daigo must surely leave his profession now. Yamashita, one of Daigo and Mika's friends, loses his mother. During the cremation, Mika and Yamashita watch Daigo perform the rituals and discover a new-found respect for Daigo's profession as they witness the grace and beauty of these rituals.


Soon after the ceremony, Diago takes Mika to the edge of a lake and hands over a small stone to Mika, and tells her about the 'Stone-letters' story told by his father (who had left Daigo and his mother when Daigo was young and had never seen him again). As they return, they are informed of a certain man's death who might be Daigo's father in the city. Reluctant at first, he decides to go with Mika. Upon seeing his father, he struggles to recognize him. When a few funeral home boys start handling the body carelessly, Daigo gets angry and decides to give his father a proper cremation himself. As he's dressing his father's corpse, Daigo discovers his father holding a 'stone-letter' that he gave to him when he was young. He fully recognizes his father now. He takes the stone and presses against Mika's pregnant belly, signifying the cycle of life and death.


Okuribito (Departures) is a brilliant movie in every sense of the word. The director beautifully captures different aspects of Japanese culture (along with the contrast of small town vs big city), the hardships, strength of relationships, and above all the beauty of life and death with death not being an 'end' but 'just the beginning of a new journey'.