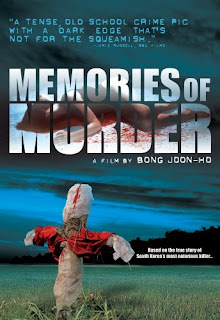 Memories of Murder (aka. Salinui chueok) is based on the true story of the country’s first-known serial murder-rapes spree in the Korean countryside, between 1986 and 1991. The movie, directed by the auteur Bong Joon-Ho was a massive critical and commercial hit. In later years, the director has gone on to write and direct box-office and critical successes like 'The Host' (the highest grossing Korean movie at the time of it's release) and 'Mother'. The movie was notable for it's realistic setting of the late 80's Korean countryside that evoked a sense of nostalgia amongst the Korean viewers. This was also the first serial-killer themed Korean movie.
Memories of Murder centers on the tense and interesting partnership between the rural cop Park Do-Mang (brilliantly played by Song Kang-Ho) and Detective Suh Tae-Yoon (Kim Sang-Kyung), sent from Seoul to investigate these cases. Their initial partnership is earmarked with growing resentment towards the methods adopted by the other to investigate the cases. The rural cop finds the detectives approach of trying to find a clues and patterns and other training manual techniques to be ineffective and non-pragmatic. The detective on the other hand is appalled at the heavy-handedness of the rural cop, whose modus operandi is to simply beat forced confessions out of suspects (including a mentally challenged young man, an actor who apparently garnered a cult-following after the release of the movie). 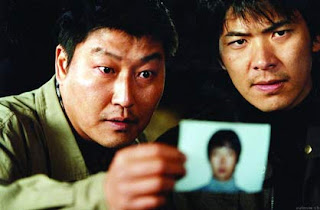 As they grapple with their personal issues, we see the incognito serial killer targeting his next victim, leaving the authorities more and more helpless and perplexed, amidst growing criticism from the public at large at the ineptitude of the police. The case starts to take a personal toll on the rural cop and the detective. They slowly start to look beyond their differences, and work together towards a single-minded objective of catching the serial-killer.
Memories of Murder meticulously captures the hardships of detective-police investigation, and the personal strains (physical and mental) that goes with the endeavor of catching a relentless serial murderer, who's always two steps ahead and may be too smart to get captured. 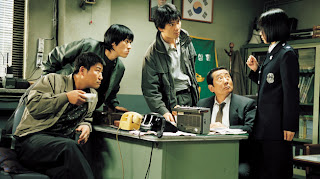 Staying true to the real events, the serial-killer remains un-captured at the end of the movie. For some, this might be a dampener as the climax doesn't reach it's desired destination, but the movie is brilliant for the journey it takes us through. The character study, gathering of clues and following leads, the sense of terror, interspersed with some comic moments that never feels out of place, makes this an intriguing ride from start to finish.
Over the years, Korean Cinema has produced some of the finest thrillers outside of Hollywood and Memories of Murder, undoubtedly, is one of their best.