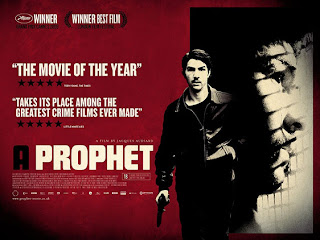 I got to know of 'A Prophet' as another one of the Oscar contenders in the "Best Foreign Feature Film" category. Though it lost the Oscar race to the brilliant Argentinian film "The Secret in their Eyes", it had already made it's mark as one of the best crime thrillers of recent times.
Tahar Rahim stars as 'Malik', a young Franco Arab man, serving his time for an undisclosed crime. A petty criminal, Malik just wishes to serve his six year sentence in the prison dominated by the rivalry between the powerful Corsicans (with their influence on the guards and other authorities) and the fighting Muslims. Malik's plan to mind his own business and serve his time doesn't quite work when he is recruited by the Corsican kingpin Cesar Luciani to murder a fellow Arab inmate. The murder scene reminded me of the memorable restaurant scene from Godfather where Michael (Al Pacino) commits his first murder. In a similar fashion, the brutal murder marks the entry of Malik in the Corsican 'family. 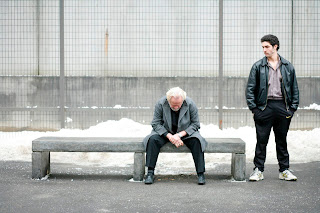 There have been other movies with similar themes, but the director Jacques Audiard takes his time with Malik, and carefully captures his gradual evolution, a process that lends a sense of realism to the script. The manner in which Malik gradually assumes control from the unwilling Cesar Luciani (Corsican Kingpin) provides some of the best dramatic moments in the movie, inspite of the understated tone of their interactions. 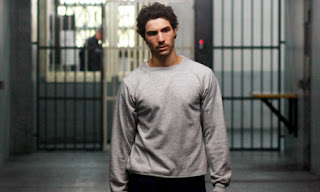 Tahar Rahim does a great job as Malik. His subtle, underwhelming and carefully nuanced performance helps to provide a sense of credibility to central character.

Though non-fans of the Crime-thriller genre might find A Prophet' a touch too long at over 2.5 hrs, but for the lot like me, it's a fascinating watch, primarily for the brilliant story-telling and some great performances by the cast.