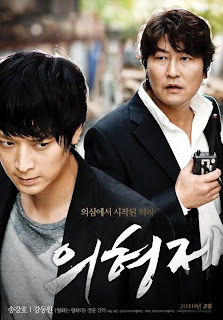 Secret Reunion (also Blood Brothers or Brothers) is an interesting second outing for the Korean director Jang Hun, who made an impressive debut with the critical and commercial hit Rough Cut in 2008. Secret Reunion was one of the biggest hits of Korean Cinema in 2010, second only to action thriller The Man from Nowhere (Read review).
Secret Reunion starts on a exciting note with Ji-Won (Gang Dong-won), one of the two young North Korean spies, who could easily pass off as a southerner, teaming up with the dreaded north Korean assassin named the 'Shadow', to kill a North Korean defector who has written a non-flatterring book about the premier of North Korea, Kim Jong-Il. But Ji-Won's young fellow comrade rats out on the mission to Lee Han-kyu (Kang-ho Song; Memories of Murder, The Host, Thirst), a member of NIS (Korean Intelligence Agency). The north Koreans complete their mission and escape after a minor firefight with the police (during which Ji-Won and Lee catch a glimpse of each other to know who they are). "Shadow" however suspects Ji-Won of treason. Ji-Won is announced a traitor and is unable to return to his wife and daughter whereas Lee is dismissed from NIS, taking the fall for the failure. The lengthy prologue sets the tone for the movie as well as acts as the backdrop for the actions of both the characters, through the rest of the movie. 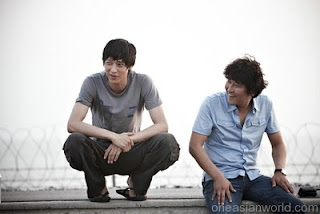 Six years later, Lee, now the owner of a small agency (3 members) who track down wives of men who had run away, and Ji-Won, a manager in a construction site cross paths. Feigning ignorance of others past, they form a tense partnership that forms the backdrop for the movie. Secret Reunion's highlight is the brilliant performance by Kang-ho Song (Lee), who once again proves why he's been a top Korean star for over a decade now. Gang Dong-won (Ji-Won) also manages a good performance of a person torn between morality, patriotism and the selfish yet respectable motive of returning to his family. 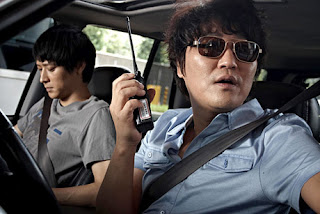 The movie doesn't have the grand theme and scope of other North-Korean themed blockbusters such as JSA, Shiri. But for me, that acts as a strength of the movie as it manages to come across as a fresh take on storytelling around this theme. The director also presents a humanistic side of the north Korean spies that adds to the realism and allows for fresh and interesting character-takes of the two main protagonists. These were probably the reasons why the movie managed to do so exceptionally well at the box office.

Though Secret Reunion might not hover near the top of my favorite Korean movies list, it still was an extremely entertaining movie with great story-telling, effective humor, believable emotions and above all, for me, believable and interesting characters.