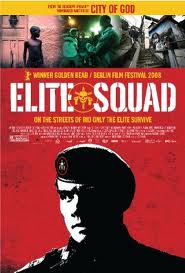 Tropa de Elite (aka The Elite Squad) is a Brazilian action thriller directed by José Padilha, who has previously directed the critical masterpiece, Bus 174. The movie is based on the activities of Elite police division (BOPE) of the Rio de Janeiro Military Police (MP). The movie was a massive blockbuster in Brazil and was also received well by critics. The movie has also won the Prestigious Golden Bear award at the 2008 Berlin Film festival.

Tropa de Elite primarily revolves around three characters, BOPE captain Nascimento (Wagner Moura), Andre Matias (Andre Ramiro) and Neto Gouveia (Caio Junqueira). Nascimento, with his wife pregnant with their first child) is looking to leave his high risk job as a BOPE captain and is searching for an heir apparent in Neto and Matias (both working in the State Military Police). Both Neto and Matias have the potential to replace Nascimento in-spite of their completely contrasting temperaments. Neto is a tough, short-tempered man who acts quickly whereas Matias is a smart idealist who likes to take a calculated and methodical approach. The movie takes a multi-storyline approach (with a great voice-over ) wherein we are taken through their individual lives. With Naschimento, one is taken through the workings of BOPE in the fight against drug trafficking that are operated through Favelas all across Rio.In the words of Naschimento, the entire police force belongs to three classes, the corrupt, the indifferent and the warriors( who can take the war to the drug lords and the corrupt system). 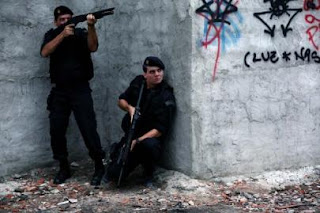 BOPE only accommodated warriors, toughened by a brutal and sometimes sadistic selection and training process wherein applicants are not asked to leave, but are simply made to quit. The viewers also get an insight into the strategy/tactics adopted by BOPE that primarily relies on a information network, quick action and a brute-force approach (torture or 'shoot first, ask questions later') as they carry out 'Operation Holiness' to ensure the safety of Pope's visit to Rio by eliminating armed gangs and ensuring that the 'Pope has a good night's sleep' at the Bishop's place.
The other stories follow Matias and Neto (childhood friends), two young MP cadets. Neto, the trigger-finger, is given responsibilities to take care of the police's automotive unit (against his wishes). Through Neto we are taken through the corruption through the police ranks as he struggles to procure spare parts required by the mechanics in his unit. 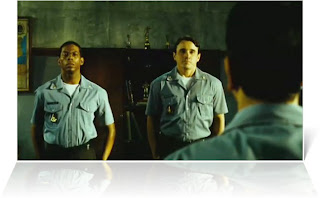 Matias, the idealist, on the other hand is studying in a law college where he makes friends with a few rich kids who like to indulge in charity work in favelas, smoke pot and criticize the police for their excessive brutality. As a consequence of Neto trying to outsmart the corrupt system, Neto and Matias end up in the enemy territory to be rescued by BOPE under Naschimento, and the three stories come together. For me, these stories also served a greater purpose in the movie to better understand the 'real' Rio de Janiero.

Tropa de Elite is a harsh and brutal movie with interesting characters (was really impressed with the three main leads), great action scenes interspersed with intelligent social commentary, as well as taking us deep into the whole corrupt 'system' that exists in government machineries around the world.