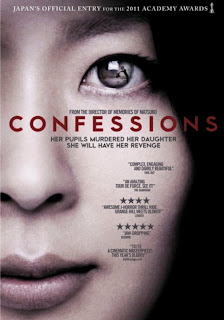 Confessions (Kokuhaku) is a visually stunning and viscerally engaging Japanese schoolyard psychological thriller directed by the talented Tetsuya Nakashima whose previous hits included Memories of Matsuko and Kamikaze Girls and showcased the directors ability to handle diverse genres with great ease. Confessions (aka Kokuhaku), however, easily feels like the best effort by the director till date.

Confessions was Japan's official entry for the 2011 Academy Awards in the Best Foreign Film Category, but couldn't make the final list of nominees after progressing to the 2nd round. It did much better at home winning Best Director, Best Film, Best Screenplay and Best Editor at the Japanese Academy Awards. The movie also won the Hong Kong Film Award for Best Asian Film.
The movie stars Takako Matsu as Yuko Moriguchi, a high-school teacher and a single mother. As the movie starts to roll, Yuko Moriguchi informs her unruly class about her decision to leave the school and this being her last day. The announcement takes a few students by surprise, however most of them are too busy  messaging on the phone or playing pranks at each other. Moriguchi however gets all their attention as she starts to speak about the murder of her 4 year old daughter and the culprits; 2 of her own students present in that very class. 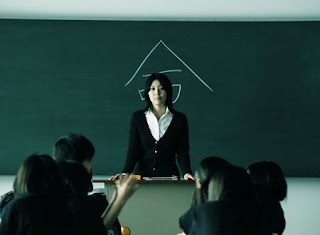 The opening moments displays the spectacular visual theme that's etched into entire story telling exercise.  The recurring slow-motion visuals  might be reminiscent of music videos (Nakashima started off as a music video and commercials director) , but they are integral to the story telling technique as they work to emphasize on the subtle aspects that might have otherwise gone unnoticed. Yuko Moriguchi, the departing teacher, continues with her lengthy monologue about her daughter, how she came to know of the truth, the impunity with which kids seem to indulge in crimes as they manage to get away protected by the juvenile law, and FINALLY, the act of her vengeance. She had mixed the HIV infected blood of her recently deceased husband in the milk cartons of the two young teens responsible for the death of her daughter. Maybe I should've put a *SPOILER* alert, but this really isn't. Any other revenge tale, this might've well been the entire plot, but in Tetsuya Nakashima's film, it's just the prologue. 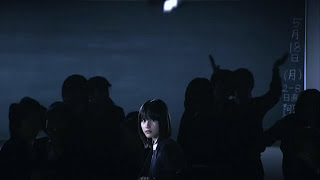 What ensues is the reverberations of Moriguchi's confession on the entire class, and particularly on the lives of those involved. The movie doesn't point any fingers nor does it make an attempt to vindicate the darkness behind the unrepentant souls. This is a beautifully disturbing movie about love, revenge, desperation, longing and above all evil, that lurks in all of us driven by our extreme desires and emotions. Sans a few moments later on, Confessions (Kokuhaku) hardly manages to rise to the same level as the tour-de-force opening sequence, but nevertheless manages to keep you engrossed, guessing and entertained till the very end with it's visceral charm, visual splendor, dark wit and raw emotional intensity.