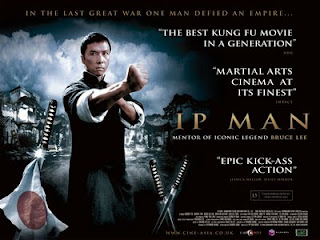 Growing up, we have all gone through the stage where we just couldn't get enough of Kung-fu. During my teen years, I was personally a big fan of martial-arts movies and the legends like Bruce-Lee, Jackie Chan, Jet Lee and Sammo Hung. Alas, all good things must come to an end and so did my fascination with martial arts movies. So it was with low expectations that I went to watch this slick biopic about the man who mastered the techniques of Wing Chun, and more popularly, the guy who gave Bruce Lee lessons on awesomeness.

Released in 2008 and directed by Wilson Yip, Ip Man is a semi-autobiographical account of the famous Hong-Kong Wing Chun master, Ip Man (aka Yip Kai-Man). The movie was a grand success at the Asian Box office and received widespread acclaim from audiences and critics alike. The movie also won an historic 12 nominations at the 12th Hong Kong Film Awards, finally winning for Best Film and Best Action Choreography. 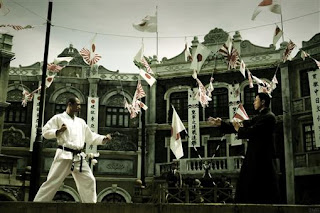 The movie stars the popular Hong Kong film and television personality Donnie Yen as Ip Man. The movie chronicles the early years of Ip Man in the Chinese city of Foshan, a hub of South Chinese martial arts. Belonging to a wealthy family, Ip Man's fascination with martial arts is purely a play of passion and he remains committed to not making it a profession despite repeated requests by the people to start a training academy. With the Chinese invasion by the imperialist Japan Army in the mid 30s, Ip Man loses his wealth and riches and has to work as a coolie to support his family. In these trying times, we see Ip Man using his skills to serve and protect fellow Chinese, and the movie attains an air of patriotism and Chinese nationalism. The Japanese characters in Hong Kong movies set during the war times have always had uni-dimensional characters, cold, arrogant and cruel. The movie is no different with the exception of General Miura (Hiroyuki Ikeuchi), who is shown in a kinder light as a somewhat honorable man with genuine respect for the art. 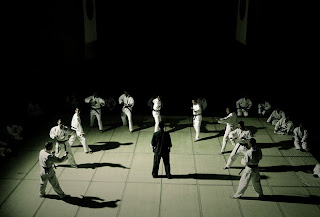 Lacking the extravagance of more popular  Hong Kong exports such as Crouching Tiger, Hidden Dragon or Hero, the movie revels in it's more authentic and old-fashioned treatment, and ironically, makes it fresh in it's appeal.

Donnie Yen's performance is rather muted as an actor, but it is by design. The fight scenes are brilliantly choreographed by Sammo Hung and Donnie Yen's mastery of various martial arts disciplines works to create a convincing on-screen display of Wing-Chun, that masterfully combines ferocity with elegance and style, with the highlight being the Dojo sequence of Donnie Yen taking on 10 Japanese soldiers. But the movie is more than it's fight sequences and is also an interesting drama about moral dilemmas , sacrifice and a personal journey. These elements combine to elevate the effort to a well-rounded film with it's gorgeous and slick fight sequences being the highlights.