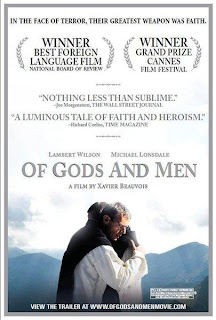 "Men never do evil so completely and cheerfully as when they do it from a religious conviction" - Michael Lonsdale as the elderly monk, Luc.


Winner of the 2010 Grand Prix award at the Cannes Film Festival, Of Gods and Men (Des hommes et des dieux) is the true story of nine Trappist monks in a monastery of Tibhirine, Algeria, living in harmony with the largely Muslim community of the region, and how they find themselves trapped in the Algerian Civil war, with the eventual kidnapping and beheading of seven priests by the  group  Armed Islamic Group of Algeria. The French drama film  was directed by Xavier Beauvois and stars Lambert Wilson as Christian, the leader of the monks and Michael Lonsdale as the aging asthmatic Priest/Doctor. Of Gods and Men was a major hit with the critics and has surprised everyone with it's commercial success in it's Domestic market. The movie has also won the Lumiere Award and the César Award (french equivalent of the American Academy Awards) for Best Film. Of Gods and Men was also the french submission for the Best Foreign Language Film at the 83rd Annual Academy Awards but couldn't make the final list of nominations (the Award was eventually won by the Danish masterpiece by Susanne Bier, In a Better World). 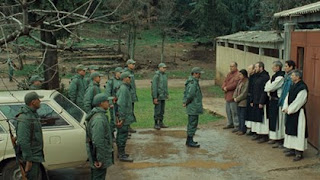 Of Gods and Men is a tranquil and austere film that has an air of freshness about it. Xavier Beauvois meticulously captures the rigors of daily chores of the monks such as treating patients, tending gardens, their group meals and their daily prayers. Their serene existence is shaken by the barbaric massacre of Croat immigrant workers by the Islamic fundamentalist group. The incident triggers a wave of fear and trepidation amongst the community members and priests. Christian (Lambert Wilson) decides for the entire group that they shall continue to remain at the monastery, and also refuses the protection of the army. The decision creates a ripple across the group as they are forced to introspect their conviction towards their chosen life of servitude to the community, in the name of god. 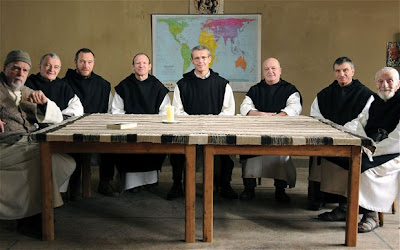 As the movie progresses, Xevoir Beauvois gradually presents a subtle contrast of religious convictions and more importantly of basic humanity. The conviction of monks to continue to serve the community amidst fear, interspersed with details of the barbaric acts of the fundamentalists presents a thought provoking insight into the good and evil that people are capable of, in the name of god.

"Should it ever befall me, and it could happen today, to be a victim of the terrorism swallowing up all foreigners here, I would like my community, my church, my family, to remember that my life was given to God and to his country. That the Unique Master of all life was no stranger to this brutal departure..."  - Lambert Wilson as Christian