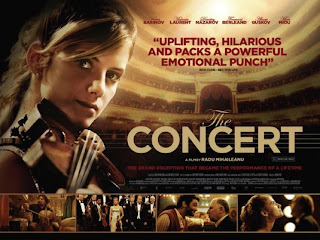 The Concert (Le Concert) is a french comedy drama (though large part is in Russian) that traverses diverse themes with mixed success. Directed by Romania born French-Jewish director Radu Mihăileanu, 'The Concert' was nominated for seven Caesars including Best Film, Direction, Editing and Writing, eventually winning for Best Sound and Best Original Score at the 2010 Caesar Awards. The movie also won a nomination at the Golden Globes in the Best Foreign Film category.
The Concert (Le Concert) stars Alexei Guskov as Andrei Filipov, a janitor, in a concert hall in Russia which he once ruled as the symphony conductor of the famous Russian Bolshoi Orchestra group 30 years back. His success and spirits, along with his baton, were broken by a hard-line communist during a live performance of Tchaikovsky's Violin Concerto as 'The maestro' had refused to fire the Jewish musicians from his Orchestra during the notorious crackdown of the Jews in the 1980's under Brezhnev's rule. 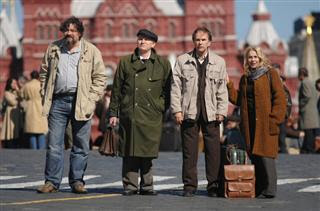 The story begins as Andrei Filipov accidentally  intercepts a last minute invitation from the  prestigious Théâtre du Châtelet in Paris, who are desperate for a performance because of the last minute cancellation by another Orchestra group. Desperate to regain his older glory days, Andrei decides to seize the opportunity by pretending to be the symphony conductor of Bolshoi. In this scam, he seeks the help of his old friend Sasha. Together they go about gathering the members from the old orchestra for their performance in Paris. Also, leveraging his position, Andrei demands that a successful young Parisian violinist Anne-Marie (Mélanie Laurent) performs with them. Andrei's motive being more than just using Anne-Marie's star appeal but a deeper connection to his past. The initial search introduces the various characters who are all interesting in their own ways and provides some of the more comical moments in the film. 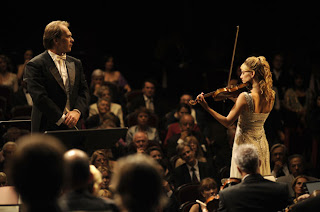 The movie's humor has elements of farce, satire and dry-wit, effectively combining to create a heart-warming appeal. The Concert also manages to sail into more sentimental and dramatic moments such as Sasha and Andrei getting nostalgic of their old days or the brilliant restaurant scene between Anne-Marie and Andrei.
In-spite of these great moments, The Concert (le Concert) just seems to fall short of it's true potential. It lacks coherence and purpose at times, and is also too goofy at moments for it's own good. In the end, with the great rendition of Tchaikovsky's Violin Concerto, the movie, along with the symphony, reaches a memorable crescendo that is one of the finest you'll ever witness on the silver screen, and makes you forget any shortcomings of the movie.
Comedy Drama French