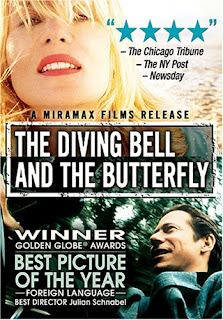 Stories around personal tragedies and disabilities have the innate ability to move your deepest emotions. They make us reflect on our lives and appreciate what we have.  The Diving Bell and the Butterfly is no exception. Based on the memoir's of Jean-Dominique Bauby, or Jean-Do as he's lovingly called, the editor of internationally reputed French Fashion Magazine Elle, it depicts Bauby's life after he suffered a massive stroke, and developed a rare condition known as 'Lock-In Syndrome' leaving his entire body paralyzed, with the exception of his left eye, his only mean to communicate with the world.

"One Blink means YES, and two blinks means NO"

Directed by Julian Schnabel, this extraordinary piece of cinema was nominated for 4 Oscars (the movie however wasn't considered for the Best Foreign Feature Film category as it was produced by an American Company; the award it would've most likely won). The Diving Bell and the Butterfly did however win major awards across the globe including two Caesars and a Bafta, Also, Julian Schnabel won the Best Director award at the Golden Globe and the Cannes Film Festival. The movie was also nominated for a Palme d'Or at the Cannes. 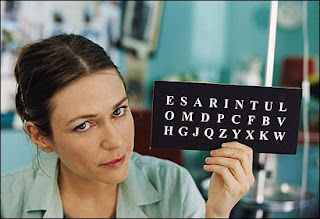 The first act of The Diving Bell and the Butterfly is brilliantly presented in a first person perspective. We share the blurred view of Jean-Dominique Bauby's (Mathieu Amalric) left eye (his right eye sewn shut for the risk of an infection in a excruciating scene) and his thoughts, as he tries to grasp his condition after 3 weeks of coma and the realization of his complete paralysis. These sad and depressing moments are cleverly balanced with some humor through Jean-Do's thoughts such as Jan-Do wondering if he's died and gone to heaven when greeted by two young and beautiful doctors. One of them is Henriette Roi (Marie-Josée Croze), a speech and language therapist who devises a exhaustive and effective communication system so that Jean-Do can communicate more than a 'Yes' or 'No', and eventually dictate his auto-biography to a young assistant Claude (Anne Consigny). 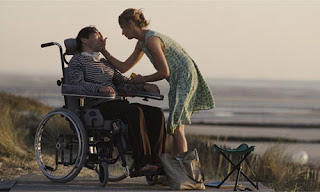 The movie's view gradually broadens out and Jean-Do leads us into his world filled with memories of the past including his relationship with his father and his estranged wife and kids, his trip to Lourdes with his girlfriend, his desire to write the 'Count of Monte Cristo' though with a female protagonist, and above all a vivid imagination. For Jean-Do, his body feels trapped in a diving bell (an old-fashioned under-sea diving suit with a brass helmet) but his soul is free as a butterfly.

The Diving Bell and the Butterfly is an emotionally intense journey of triumph over tragedy. Julian Schnabel's brilliant direction ensures that we never lose touch of Jean-Dominique Bauby's physical inabilities but yet share his liberated imagination and artistic expressions.