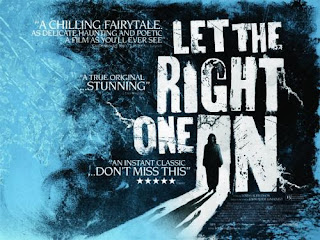 Vampire movies have been all the rage in the last few years with the success of the Twilight series of films. But if you are a fan of the Twilight films, chances are you'll probably not appreciate the 2008 Swedish gem 'Let the Right One In' with it's grittiness and realism.

One of the most popular movies to have come out of Sweden in recent years, 'Let the Right One In' is a chilling and touching tale of friendship and romance directed by the talented Tomas Alfredson, who's next movie is the much awaited Hollywood adaptation of popular John le Carre novel Tinker, Sailer, Soldier, Spy to be released later in the year. Let the Right One In is based on a novel of the same name by John Ajvide Lindqvist who also wrote the screenplay for the movie. A massive hit with the critics and the box office alike, the movie won the Best Film Award in Film Festivals across the world and was also nominated for a BAFTA. At home in Sweden, it won 4 Guldbagge Awards including Best Direction and Screenplay. The movie has also inspired a brilliant 2010 Hollywood remake 'Let Me In', if you happen to be 'anti-subtitles'. 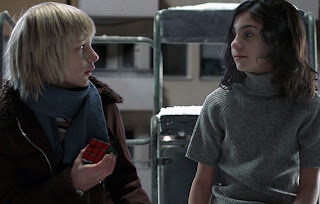 'Let the Right One In' is the story of pale young dark-eyed girl Eli (Lina Leandersson) who moves into a suburban apartment with a clumsy older man masquerading as her father. In reality, as we slowly start to realize in graphic and horrific details, he's Eli's  human servant and looks after her nourishment by hanging people to dry (quite literally !). Living next door is a lonely 12-years old boy Oskar (Kare Hedebrant), who's a victim of bullying at school and fantasizes about teaching his tormentors a lesson. Eli and Oskar meet at the snow draped courtyard of their block of flats. Though Oskar finds Eli's company interesting despite her odd body odor and behavior, Eli's interest in Oskar is more sinister. But as they spend time together, it's apparent that they desire for companionship overwhelms any other emotion. It's the setting of any boy-girl romance barring an interesting detail. We gradually realize that Eli is a Vampire. But for Oskar, that doesn't seem to matter. 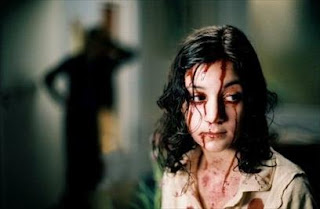 'Let the Right One In' has a sincere and matter-of-fact approach to the young romance between Eli and Oskar which is uniquely refreshing. The movie's ambling pace and interesting plot elements makes the movie both character driven and plot driven and never ceases to capture your attention. The movie also remains sincere towards vampire myths such as you need to invite them in for them to enter your home. Despite the young protagonists, this is not a movie for children as  there are moments of extreme graphical content interspersed throughout the film and the tone of the movie is grim, cold and horror grounded for the better part, and it's accentuated by the setting of snow-capped landscapes and dark shades. 'Let the Right One In' is a brilliant concoction of adolescent pain, young love and vampire mythic-ism presented with subtle elegance and grounded sincerity.