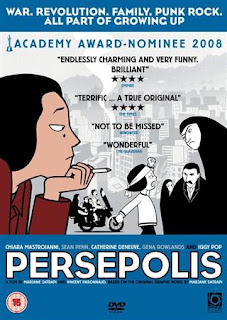 "Don't judge a book by it's cover" - Old English Idiom
At a casual glance, the cartoonish exterior of Persepolis belies the intellectual depth of the intense and complex animation drama based on the best-selling graphic novel by Marjane Satrapi. Written and directed by Vincent Paronnaud and Marjane Satrapi, Persepolis is Marjane's autobiographical account of growing up as a young girl, in the midst of the Islamic revolution in Iran. Even before it's debut at the 2007 Cannes Film festival, the movie was heavily criticized by the Iranian government as Persepolis, in their opinion, undermined the significant achievements of the Islamic revolution.
Despite the controversy, the movie instantly garnered widespread critical acclaim upon it's release. Persepolis won the Jury Prize and was nominated for a Palme d'Or at the Cannes. The movie was also nominated for an Oscar (losing out to Ratatouille) in the best Animated film category, as well as a Golden Globe nomination for Best Foreign Film. At home, it was nominated for 6 Caesars, eventually winning for Best Writing and Best First Work. Persepolis also featured on most critics Top 10 movies list for 2007, and more notably featured in  Empire magazine's  'The 100 Best Films of World Cinema" in 2010, coming in at Rank#58.
Persepolis begins with a 24 year old Marjane, in colorful animation, waiting for a flight to Iran. As she reflects on her past, the movie shifts to a hand drawn and blocky black-and-white theme, consistent laregly through the movie. Her trip down memory lane begins with a 8 year old inquisitive and energetic Marjane, living with her rich parents and a free-spirited grandmother in Iran. Contrary to her schooling about the virtuous Shah of Iran, she is educated on the crimes committed by the dictatorial Shah by her parents. There are celebrations as the punk-rock tolerant Shah's regime is ousted. But these are short-lived as the fundamentalists win the election with overwhelming majority and enforce edicts that forces women to wear veils, bans western music, parties or anything considered un-islamic. Afraid of the trouble her rebellious behavior might cause, her parents decide to send her to France. 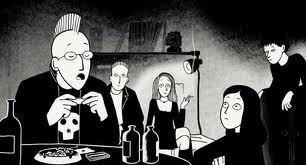 In Europe, Marjane experiences her first crush (though the guy turns out to be gay), cheating boyfriend and being part of a nihilistic punk crowd. Her stay in Europe has some of the most humorous moments in the film. It also has some of the darker moments of Marjane's teen years as well. Lonely and depressed, she decides to return to her parents in fundamentalist Iran, only to leave later after making a few regrettable life decisions. Persepolis in essence is an engaging coming-of-age drama that skillfully manages to blend itself into the impact that Iranian revolution had on the lives of people. It's smart and complex writing with poignant humor, and a unique presentation makes it a truly refreshing and a rewarding experience.