Review of The Illusionist (L'illusionniste) French - 2010 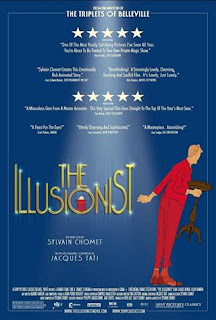 The world of animation movies have never lost it's charm despite great advances in technology that have allowed film-makers to create visually stunning live-action movies with settings, themes and effects that were earlier proprietary to animated films. This has largely been the result of advancements in animation technologies such as 3D effects, motion capture and other powerful computerized techniques as seen in movies like Toy Story, Wall-E and Shrek (just to name a few) . In such an era, 'The Illusionist' by Sylvain Chomet is remarkably (and paradoxically) refreshing with it's old-age approach of hand-drawn images and water-colors. Based on a 1956 screenplay by the French actor, comedian and director Jacques Tati, The Illusionist was nominated for an Academy Award as well as a Golden Globe in the Best Animated Feature Film category. On both the occasions, it lost out to the hugely successful and highly acclaimed Toy story 3. It was luckier at home winning a Caesar award for the Best Animated Film.

As a work of animation, The illusionist doesn't offer any funny sidekicks, mythical monsters or music filled extravaganzas but is rather a subtle and engaging human story befitting a live action art-house production. The illusionist is the story of an aging stage entertainer who has lived past his glory days (replaced by pop-stars and rock bands) and has to survive by performing in small (and largely empty) theaters, weddings, pubs and shops. 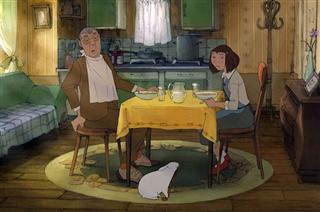 During a visit to Scotland, for a performance in a small pub, The Illusionist finds a true admirer in the form of a young chambermaid Alice. Barely in her teens, Alice believes that the aging Frenchman is a real magician who can simply conjure up a pair of brand new red shoes for her. As she secretly follows The Illusionist to Edinburgh, it marks the beginning of a relationship between them. As her father figure, the Illusionist  shares his small apartment with her and struggles between jobs to provide for her wants, from a fancy new pair of heels to an expensive winter jacket.

The Illusionist paints a gorgeous setting of Edinburgh and the delicate yet deep relationship between the two lead characters is beautifully captured, despite any words being spoken in the movie. The Illusionist is old-school. It's painstakingly produced beauty and elegance  shines with a soulful grace and charm.