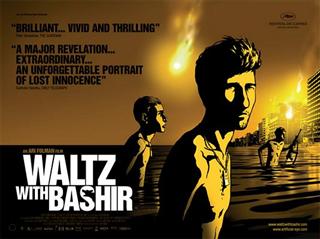 One of the worst genocides of post World War II era took place during the bloody Lebanon War of 1982. After a failed assassinated attempt by Abu Nidal Organization against Israel's ambassador to the United Kingdom, Shlomo Argov, the Israel Defense Forces invaded southern Lebanon. and attacked the PLO and the Syrian and Lebanese Muslim fighters who were fighting against Israel for the Palestinian cause.

Waltz with Bashir is the recounting of the events by the writer and director of this animated documentary film Ari Folman, that lead up-to the massacre of Palestinian refugees at Shabra and Shitila in Southern Lebanon during the War. One might suspect the efficacy of an animated film as a medium to tell the story of this gruesome war and the massacre, that too a documentary. But, all it takes are the opening few minutes with graphic shots of rabid dogs running through the street to convince you otherwise. 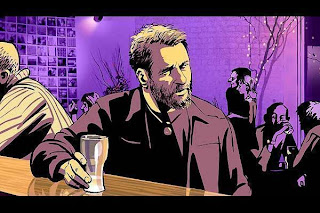 Waltz with Bashir is a bold effort by Ari Folman, and vowed critics around the world with it's gutsy, unique and original story-telling. Waltz with Bashir was nominated for the 2009 Academy Award for the Best Foreign Language Film where it lost out to the Japanese beauty Departures (Read Review). The movie however won the Golden Globe and the Caesar Award in the same category. It was also nominated for a Palme d'Or at the Cannes film festival.

The film is largely narrated in flashbacks, as Ari Folman, who took part in the Lebanon War as a 19-year old infantryman with the Israel Defense Forces, tries to unravel the mystery behind a dream of his, through conversations and interviews with fellow soldiers and other individuals involved in the war. 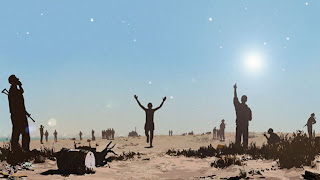 Waltz with Bashir masterfully captures the war on minds as it does the war on grounds. The events of the war are told from the individual perspectives of those interviewed and points towards the absurdities, brutality and the madness of the conflict. The movie also artistically captures the wild imaginations and illusions of the soldiers as they try to mask their psyche from the harsh realities.

Waltz with Bashir doesn't offer heroes or make accusations, but rather feels like a confession that is honest and humane. Though animated, the characters are real and so are their emotions. It is reminiscent of great pacifist war movies such as Oliver Stone's Platoon and Kubrick's Full Metal Jacket, and easily ranks with them as a brilliant war-themed tale of humanity.
Animation Drama Israel War