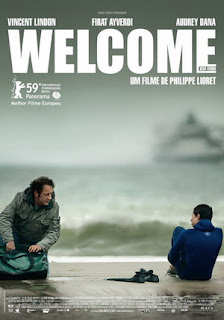 Illegal immigration has always been a sensitive issue in the developed world. Welcome, the ironically titled 2009 French movie by Philippe Lioret (Je vais bien, ne t'en fais pas) is the story of the friendship between a middle-aged French swimming instructor Simon Calmat who's going through a rough divorce and a young Kurdish immigrant Bilal who desperately wants to reach London to meet with his childhood love, even if it meant swimming across the English channel. The movie is set in Calais (France), the unglamorous coastal city that happens to be the closest French city to England as it overlooks the Straight of Dover, the narrowest point in English channel.
Welcome became really popular in France and succeeded in highlighting the plight of illegal immigrants living in Calais. The movie also triggered debates in the parliament about abolishing the law that penalizes French citizens who help the immigrants. The movie was nominated for 10 Caesars, though failed to win any. It did notably win the Lux Prize from the European parliament.

Given the background, I was naturally inclined to perceive the movie as one dealing with the sufferings of the illegal immigrants in Calais. But in reality, it just acts as the backdrop. Simon and Bilal share more in common than what their difference of race, religion, accent, age and background may suggest. Veteran actor Vincent Lindon gives a masterful performance as a cynical middle aged man struggling with the separation from his social activist wife Marion (Audrey Dana). His protective and fatherly approach towards Bilal seemingly an subconscious attempt to become the man his wife wanted him to be. Young Firat Ayverdi as Bilal also gives a subtle yet powerful performance as a man with unflinching resolve. 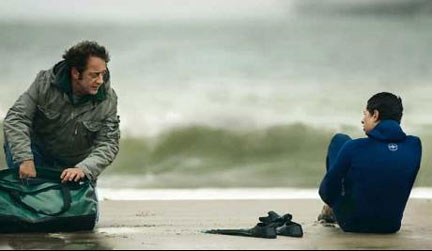 Welcome, in essence, is really a tale of unrelenting love, friendship and humanity. The movie could easily be regarded as a love story where the main characters are desperately yearning to be with the one they love. The writer and director Phillipe Liorent has constructed a beautiful emotional story, though sad as well, along with great performances from the main characters that help to elevate the movie from being a cliche to a inspirational and moving experience.