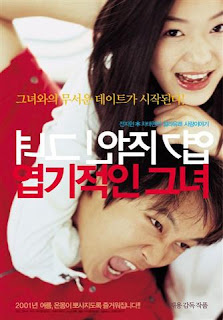 My Sassy Girl (엽기적인 그녀) is arguably the best Korean romantic comedy of modern times. Directed by Kwak Jae-yong, the movie is inspired from a series of online blog posts by a young man Kim Ho-sik describing his relationship with his 'sassy' (scary) girlfriend. The movie became the highest grossing Korean Romantic comedy at the time of its release, and was also a mega blockbuster across the whole of Asia. The movie also inspired an Hollywood remake starring Elisha Cuthbert and Jesse Bradford that failed miserably.

The movie stars Tae-hyun Cha as Kyun-woo, a soft-hearted and occasionally naive college student caught in a wierd on-off boyfriend-girlfriend situation with a beautiful but unpredictable and sometimes-violent 'the girl' (her name mysteriously not used through the length of the movie), played by the talented and charismatic model/actress Jyun Ji-Hyun. 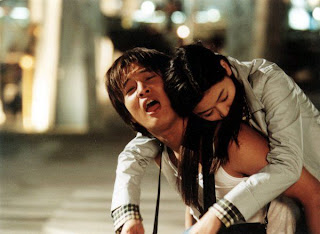 My Sassy Girl starts with Kyun-Woo being forced to be the care-taker of a sloshed 'girl' while returning home in a subway, through a delightfully humorous turn of events. Thereafter, we see Kyun-Woo repeatedly embarassed, humiliated, thrown into prison and taken hostage resulting from his involvement with 'the girl'. 'The girl' is also an aspiring film-maker and this leads to some of the most amusing scenes in the movie as they try to imagine themselves as central characters in 'the girl''s amateurish screenplays that range from a matrix style action movie to a tragic romance, all presented with inventive comical overtones. 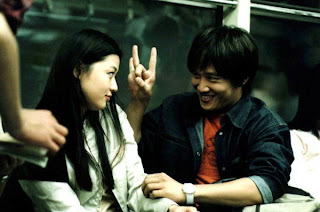 Though filled with cliches and slapstick humor through the first half, it starts to reveal the insecurities of Kyun-woo and 'the girl' and their reluctance to get into a real relationship, despite the pretense. Romantic and bizarre at the same time, their confusing relationship gradually evolves into something more real and emotional, and the movie steers itself towards some poignant and melodramatic moments. But My Sassy Girl never really discards it's comic charm largely made possible by the terrific performances of the lead and their chemistry. 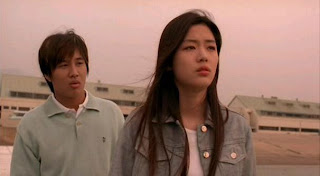 Jyun Ji-Hyun is simply superb. From her opening scene as a drunk commuter, to her turn as a bullying feisty girl who loves to slap people (especially the male lead Cha Tae-Hyun), to being an adorable girlfriend and then as a girl vulnerable in love, she displays an impressive range as an actress, stealing every scene she's a part of. Also impressive is Cha Tae-Hyun as the bullied boyfriend Kyun-woo, who plays his role to 'nerdy' perfection. My Sassy Girl effortlessly moves from being a romantic teen comedy with laugh-out loud moments, to a romantic melodrama (sans the melancholic overkill that other Korean love stories often succumb to). The movie is an absolute delight to watch and is a wonderful genre-bending cinematic experience.