Even the Rain (También la lluvia) Even the Rain (También la lluvia) is a beautifully crafted multi-layered effort that's effectively a film within a film. Directed by Icíar Bollaín, the movie revolves around the production of a film by an idealistic and passionate young film-maker Sebastien, brilliantly played by Gael Garcia Bernal (Amores Perros), who travels to Bolivia with the film's crew to direct a story about the cruelty of the great explorer Christopher Columbus towards the Native Indians. The crew is accompanied by a pragmatic and cynical producer Costa (Luis Tosar) whose primary inclination for shooting in Bolivia, and involving the native Indians, is the economics involved. The film is an interesting study of art imitating life, and life imitating art. Even the Rain was nominated for an impressive 13 Goya awards, winning 3. It was also the Spanish Oscar submission for the 83rd Academy Awards, but couldn't make the final list of nominees in the best Foreign Film category. 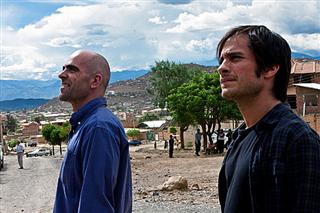 As the film crew start the shoot, screenplay cleverly presents a dimension of Columbus's discovery of the new world that is often not publicized in popular literature. Through the clever usage of rehearsals and debates amongst the crew members, we are made ware of the moral arguments between the key historic players such as Columbus himself who sanctioned the enslavement and exploitation of the native Indians, and Bartolomé de las Casas and Antonio de Montesinos who were appaled by the spanish treatment of the Indians and decided to speak out against their compatriots and spent the rest of their lives helping the native Indians. Karra Elejalde is brilliant as the temperamental and drunk actor who plays Columbus. His overt cynicism masking a deep felt sense of morality. 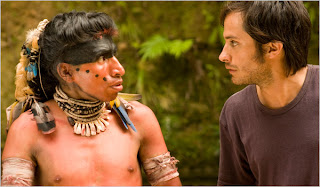 But the soul of the movie is Daniel (Juan Carlos Aduviri), a native Indian picked by Sebastien to play the role of revolutionary leader Hatuey who lead the revolution against the Spaniards, despite producer Costa's disapproval as he felt that Daniel would only create trouble. Costa's prophecy comes true as Daniel gets involved as a social activist leading the protests against the privatization of water supply by the MNCs (based on the real life Cochabamba Water Wars). Daniel's participation in the protests and his imprisonment threatens to derail the film shoot. In a desperate attempt to the salvage the film, Costa resorts to bribing various people including a police officer to let out a tortured Daniel from the prison for just a day so that shoot of an important scene can be finished. The movie brilliantly creates a parallel between history and the present with the film-makers exploiting the Indians for their selfish pursuits and completely ignoring the struggle of the Indians to claim their right over something as fundamental as 'water from the rains'. 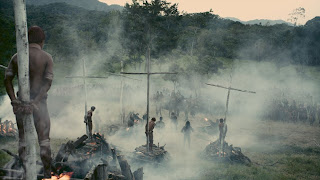 The brilliant direction and screenplay, along with some great camera-work makes the film affect skillful transformations between the historical fantasy and the harsh realities of the present day.
Much of Even the Rain's charm emanates from it's mature, realistic and non-preachy portrayal of the important events and the brilliant performances adds depth to the sincerity of the characters.