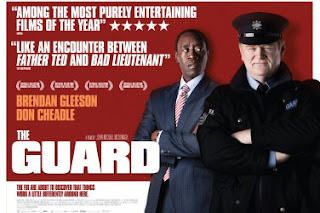 In 2008, Brendon Gleeson starred in Martin McDonagh's brilliant dark comedy In Bruges. In that movie, Brendon Gleeson played an experienced, matured and somewhat idealistic hit-man accompanied by a young and brash Colin Farrell with a politically incorrect sense of humor. Written and directed by Martin's older brother John Michael McDonagh (Ned Kelly), The Guard bears shades of resemblance with In Bruges but easily stands on it's own, as enforced by a Grand Jury Prize nomination for at the 2011 Sundance Film Festival. 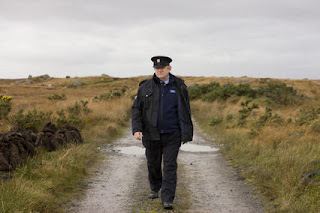 In The Guard, Brendon Gleeson plays Sgt. Gerry Boyle, a long-serving member of the Galway police force, also known as 'Garda'. In many ways, Gleeson's Gerry Boyle feels like an older version of Colin Farrell's Ray from In Bruges. He swears and drinks, loves acid and role-play with prostitues, makes racist jokes and comments, and shows a complete disregard to his duty as a policeman. But he also has a subjective respect for ethics and morality. Given the above, one should expect a completely dis-likable protagonist, but it's quite the contrary. 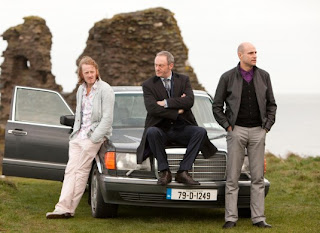 The Guard starts off with a murder, with the number 5'1/2' scribbled on the wall that's perceived to be the work of a serial-killer. Enter Don Cheadle as an FBI special agent Wendell Everett, who informs the authorities that the victim is actually part of a drug smuggling operation and a $500 million Cocaine drop is going to be made in the quiet town of Galway. But The Guard is hardly a plot driven crime thriller. It's really more of character takes of interesting personalities both sides of the law. Popular British and Irish actors Mark Strong, Liam Cunningham and David Wilmot form the menacing drug smuggling trio who go around indulging in obscure but entertaining conversations about Welsh philosophers and purpose of life, in between murdering a rookie cop from Dublin and paying-off the cops. Mark Strong and Liam Cunningham are simply brilliant in the few minutes they have on screen. 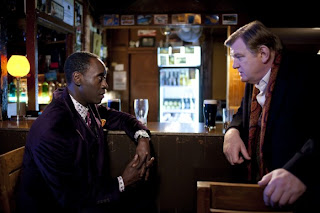 The Guard also has elements of buddy-cop cliches with Don Cheadle in a thankless role. It's only his fine abilities as an actor that prevent him from being just a prop for highlighting Gleeson's eccentricities.  But in the end, this is really Brendon Gleeson's movie who gives a tour de force performance at it's charming best, and presents a thoroughly enjoyable character. If you can handle the at-times incomprehensible Irish Brogue, the movie's an absolute treat. Though one can't help but wonder if it's a little too cute and charming for it's own good.