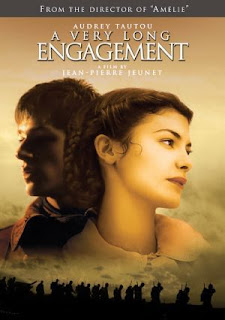 A Very Long Engagement is a romantic drama set around the first World War. It re-unites the winning combination of director Jean-Pierre Jeunet and starlet Audrey Tatou who previously collaborated in the enormously successful romantic-comedy Amelie in 2001. Based on a novel by  Sebastien Japrisot, A Very Long Engagement was nominated for Academy Awards for Cinematography and Art Direction, as well as a BAFTA nomination for Best Foreign Film. The movie was also nominated for an impressive 12 Caesars, winning 5.
Audrey Tatou stars as Mathilde, a young woman who's desperately searching for her fiance Manech. Manech, a young soldier nick-named 'Cornflower', was one of the five soldiers convicted  for self-mutilation in an attempt to escape military service, and thereby condemned to death by forced abandonment in the 'no man's land' during the Battle of Somme in WWI. 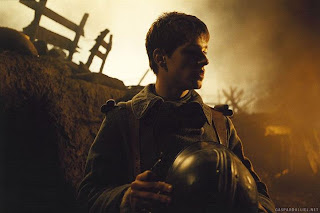 The movie bears a certain resemblance to Amelie in the cinematography, art direction and the voice-over narration department. But it is visibly a more ambitious effort. The war scenes in the movie are filled with poignant moments and has a certain 'The Thin Red Line' perspective on the war, but fails to completely capture the intensity, despite some graphic imagery. The soldiers on the front-line are a varied bunch and Jean-Pierre Jeunet skillfully embeds their character takes, especially of the five soldiers who are crucial to the mystery behind Manech's disappearance.

There are strong supporting performances by the likes of Jodie Foster, and Marion Cotilard who won the Caesar for Best Supporting Actress as Tina Lombardi, wife of one of the court-martial-ed soldiers out for revenge. Despite the large array of characters, this is largely a plot-driven movie with Audrey Tatou's Mathilde trying to piece together a complex mystery. 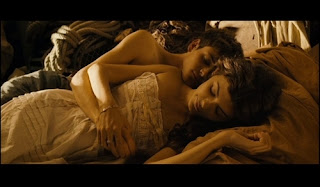 The movie however takes it's time and might make one struggle to keep up with the proceedings, making you restive through the first half. But it all gradually starts to come together to a satisfying conclusion, though somewhat along the expected lines.  A Very Long Engagement is a beautiful collage with it's themes of romance, war, mystery, laden with subtle wit and humor. Though falling short of being a epic masterpiece, it is nonetheless French Cinema in one of it's finest moments.