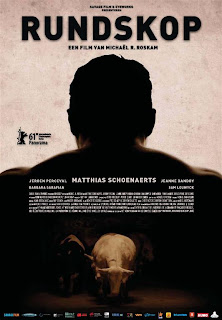 Written and directed by Michael R. Roskam, Rundskop (Bullhead) plays like a stylish noir-crime thriller that is in a league of it's own. The movie was premiered recently at the Austin Fantastic Film Festival and won the awards for Best Actor, Best Film and Best Director. Belgium also obliged as it's official submission to the Oscars, but it remains to be seen whether it will get the Oscar nod. Jacky Vanmarsenille (Matthias Schoenaerts) is a 30s something young and successful cattle farmer, whom everyone knows to steer clear of. As Jacky narrates to us during the opening credits, with some beautiful and rich Flemish landscape in the background, he never really got a chance in life. 'Life is fucked'. Vanmarsenille beef is popular, largely due to the growth hormone they are illegally nourished with. A mountain of a man, Jacky himself depends on the hormones that feeds his body but feeds on his soul. His beefy exterior belies that pain and suffering he endured as a child, both physical and mental, that lingers on. 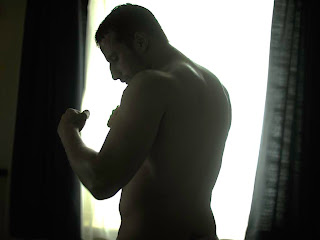 Jacky's life is seemingly normal, or atleast as normal as a farmer on steroids selling cattle meat and milk illegally beefed up with hormones. It all changes when a colleague Sam Raymond (Frank Lammers) brings a business proposition to Jacky that involves directly supplying to the king-pin of the hormone mafia, Marc DeCuyper (Sam Louwyck). But during the meeting, one of DeCuyper's crew member Diederik's (Joroen Perceval) presence brings back painful memories of Jacky's childhood that involved a beautiful Lucia Schepers’ (Jeanne Dandoy) and a horrific incident with her sociapathic brother Bruno (David Murgia).

Unaware, Jacky is also caught up in a federal investigation related to the murder of a federal agent investigating Decuyper's illegal bovine drug trade. Michael R. Roskam also captures the interesting divide between the French speaking Wallonian's and the Dutch Falnders, though it might be lost on many of the international audience. Matthias Schoenaerts as Jacky Vanmarsenille gives a tour-de-force reminiscent of a tragic greek anti-hero, and  Michael R. Roskam's remarkable direction makes it a masterful character study and a brilliant neo-noir cinematic experience, rarely seen from the land of Flanders.